Andhra launches scheme to give full rights to beneficiaries over houses 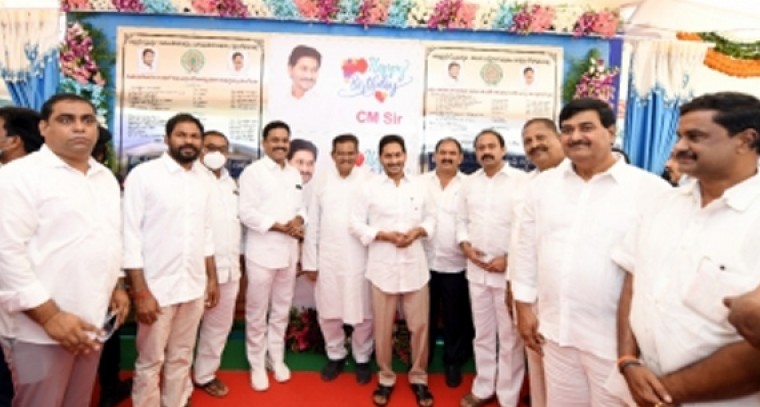 Amaravati, Dec (IANS) Andhra Pradesh Chief Minister Y.S. Jagan Mohan Reddy on Tuesday celebrated his birthday by launching a new scheme under which over 52 lakh families will be given full rights on their houses with the registered title.

Addressing the gathering, he said that to date, only dwelling rights were provided to the people under different housing schemes but now with the launch of OTS, they will get full rights with registration. The beneficiaries can now pass on the houses to the next generations as an asset, can avail bank loans, and can also sell their property at a market rate without any hassles.

Jagan Mohan Reddy said that the government is waiving off the Rs 10,000 crore outstanding housing loans of 40 lakh beneficiaries who availed loans from the AP Housing Board Corporation since 2011. They will be given house documents with clear titles with free registration benefitting 52 lakh families.

As part of the scheme, the Chief Minister distributed registered documents to 8.26 lakh people who have enrolled for OTS. Similarly, people who have constructed houses in the government allotted lands with their own money and don't have full rights, can avail registration by paying just Rs 10 and secure their property. For free registrations alone, the government has been spending Rs 6,000 crore.

The Chief Minister said that the entire value of the assets would be around Rs 1,58,000 crore, and the beneficiaries can avail the scheme by paying nominal amounts of Rs 10,000 in villages, Rs 15,000 in municipalities, and Rs 20,000 in municipal corporations. In case the loan amount is less than the stipulated amounts, the beneficiaries can then pay the outstanding loan amount and get complete rights on their property, he said and added that the scheme is extended up to Ugadi (April 2) and urged people to make best use of it.

He dismissed the opposition's claim that the government launched the scheme to collect money from people. He pointed out that in the last 30 months, the government has credited Rs 1.16 lakh crore to people through Direct Benefit Transfer (DBT) without the interference of middlemen under various welfare initiatives.

"Why would I take money from the poor in the name of OTS, when over Rs 1.16 lakh crore has been provided through various schemes," he asked.

Taking a dig at opposition leader Chandrababu Naidu and a few media houses, he said that they were not able to digest the good initiatives that are being provided to the poor and questioned why the previous government did not implement the scheme when they were in power. During 2014-19, although the officials had sent proposals to waive off the interest amount, the previous government refused to do so and even failed to provide complete rights to 43,000 people who have cleared all the pending loans of Rs 15.29 crore, he said.

The Chief Minister asked people to question if the opposition would purchase their houses at a market rate even without any registered documents and why were they objecting when the government is providing registered houses which can be passed to the next generations without any hassles. He asked them what they did during their regime other than abandoning the poor.