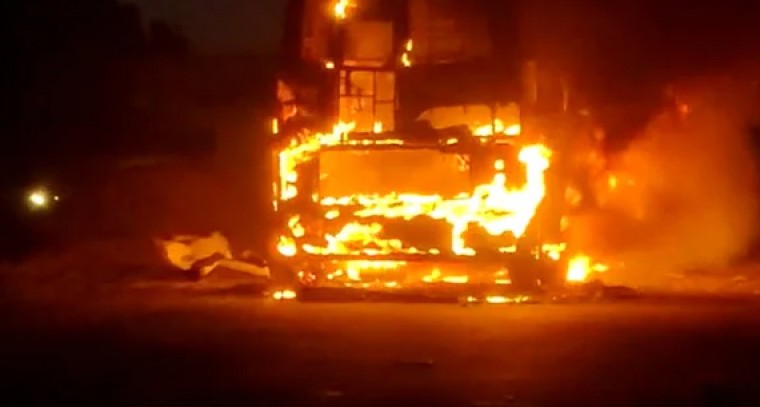 The bus, which was on its way from Hyderabad to Chirala in Prakasam district, was completely gutted in the fire.

Noticing the smoke, the bus driver applied brakes and alerted the passengers who were asleep. Some of them jumped from windows to save themselves.

The incident occurred near Timmarajupalem in Paruchuru mandal around 5.30 a.m. A fire tender rushed to the scene and doused the flame.

Passengers lost all their belongings in the fire, which is suspected to have been caused by a short circuit. Police registered a case and took up investigation.

The bus had left Hyderabad at 10.30 p.m. on Wednesday and was to reach its destination in another one hour when the fire broke out.

The driver said only nine passengers were in the bus as the majority of passengers had got down at Narasaraopet and other stops.

Passengers complained that there was no fire extinguisher in the bus and the driver and cleaner had no knowledge of how to open the emergency exit.

The fire accident occurred a day after a bus of state-owned Road Transport Corporation (RTC) plunged into a stream in West Godavari district, killing nine people.