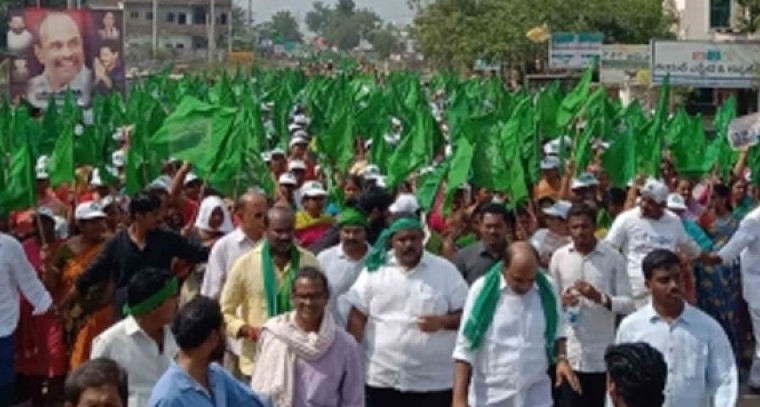 The organisers of 'Mahapadyatra', held to demand that Amaravati be retained as the only state capital of Andhra Pradesh, announced that the participants will stay in Gudluru. The walkathon will resume from the same village on Friday.

For last couple of days, the farmers, including women, were continuing the foot march despite intermittent rains. In view of the forecast of heavy rains, the organisers decided to halt it for a day.

Titled 'court to temple', the walkathon from Amaravati to Tirupati began on November 1.

Raising slogans of 'Jai Amaravati', the protesters are covering 10-15 km every day.

After passing through various parts of Guntur district, the foot march entered Prakasam district last week. Villagers along the route are joining the farmers to show their solidarity.

Leaders of the Amaravati Parirakshana Samithi and Amaravati Joint Action Committee (JAC) claim that they are receiving huge support from farmers, women and other sections of society.

They demanded that the State government drop its plans for trifurcation of the state capital and retain Amaravati as the only capital.

The mega walkathon, which began from Thulluru, is scheduled to conclude at Tirupati on December 17.

The walkathon will continue for the next one month to reach Sri Venkateswara temple at Tirumala, passing through 70 major villages in Guntur, Prakasam, Nellore, and Chittoor districts.

Barring the ruling YSR Congress Party (YSRCP), all political parties are extending support to the 'Mahapadyatra'. The YSRCP has, however, described the foot march as a ploy by TDP president and Leader of Opposition N Chandrababu Naidu.

Amaravati farmers had been protesting for 700 days against the state government's plans for trifurcation of the State capital. With aMahapadyatra' their protest entered a new phase.

After coming to power in 2019, the YSR Congress Party government led by YS Jagan Mohan Reddy has decided to shift the administrative capital to Visakhapatnam and the judicial capital to Kurnool while retaining Amaravati as only the legislative capital.